Bali, Island of the Gods. This idyllic little island in the archipelago of Indonesia is famous with Western travellers, but few who visit really get to know its culture, history and people.

To give you a greater understanding of this exotic Indonesian island,  I’ve created a list of 25 quirky, fun and interesting facts all about Bali.

Since 1960 the island has gradually grown from a quiet, secluded and remote little island, into one of the world’s most popular tourism destinations.

Thanks to its amazing volcanic landscape, stunning beaches and sweet natured people, Bali has become an exotic destination for relaxing and enjoying vacations.

*Disclosure: Some of the links below are affiliate links, meaning, if you click through to make a purchase, I earn a small commission – at no extra cost to you.

Indeed, while Bali is the name of the island, it is also a province that includes a handful of smaller islands congregated off the main island’s southeast coast.

These are Nusa Penida, Nusa Lembongan, and Nusa Ceningan – a cluster of much smaller islands just a 20 minute boat ride away from Sanur port. They are still relatively unknown and tourism is only just beginning to take off there, so its definitely worth a visit.

2. Bali is in the ‘Coral Triangle’

Positioned right in the middle of the world’s richest waters for corals and sealife, Bali sits in the ‘Amazon of the Seas’ – aptly named for it’s incredible marine biodiversity.

The Balinese have a concept where north actually refers to ‘up’ – a place the gods and spirits dwell.

As such, high points like Mount Agung, which is considered the most sacred spot, represents ‘north’, and you’ll find that most Balinese dwellings and shrines face ‘north’ to the mountain.

The overall temperature remains moderate across Bali as the island enjoys a tropical climate.

5. The Balinese have just Four Names

A fascinating aspect of Balinese culture is that there are just 4 names: Wayan, Made, Nyoman, and Ketut, and the people know their babes names before they are even born.

The names are in order of the child’s birth, so the first baby is called Wayan, the second baby is Made, the third baby is Nyoman, and the fourth is Ketut. If there’s a fifth baby, they are called Wayan again, and the cycle continues.

6. The World’s Most Expensive Coffee

Kopi Luwak is the name of a rare coffee that’s all too commonly found around Bali.

It’s produced in a rather odd and unethical way – from civet droppings. The civet animals eat coffee beans and their poop is collected and processed to make the unique coffee, which can sell for as high as $50 a cup. 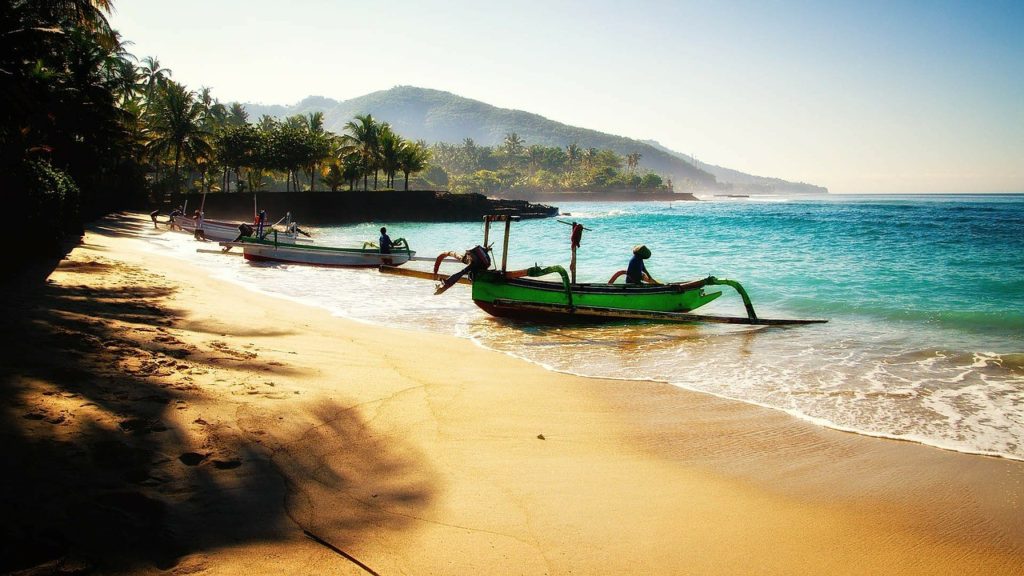 Did you know that 80% of Bali’s economy is built on tourism alone?

This may not come as a complete shock to many. Indeed, tourism is enormous here – it has grown steadily in the past couple of decades and has sky-rocketed within the last five years!

There are a lot of downsides to the mass of crowds flocking to this island, not least the pollution and over-commercialisation aspects.

That being said, tourism has changed the lives of many ordinary Balinese citizens – it has allowed many of them earn far more than they used to, by jobs such as tour guiding, collecting tickets, or letting out their homes.

During the first three months of a Balinese baby’s life, they are carried everywhere.

They are LITERALLY not allowed to touch the ground until they pass the three-month mark!

9. An Island of Pet Lovers

The Balinese are pet lovers and in most homes there are at least two species of pet – ranging from dogs, cats, birds, cattle, pigs and even chickens.

10. It’s Polite to Leave Food on Your Plate

If you’re invited into the home of a Balinese person, you should leave some food left over on your plate.

You may find yourself enjoying dinner sitting on the floor and eating with your hands, in which case, you eat with your right hand only. When you’ve finished, it’s recommended to leave a little bit of food on your plate to signify that you’re done.

For more information on customs and mannerisms in Bali, Do’s and Don’ts, and scams to avoid, head over to my post: What Not To Do In Bali

Mount Agung and Mount Batur are the two towering volcanos of Bali, and both are still pretty active.

Mount Agung is considered the most sacred spot on the island. Gunung Agung, as it is known, last erupted in November 2018, and still makes its presence felt with occasional gassy belches.

The Balinese believe that Mount Agung is a replica of Mount Meru, the central axis of the universe. Standing at 3,142 meters, it is the highest point on the island.

12. Nyepi – The Day of Complete Lockdown

Nyepi day of silence, is a Hindu New Year celebration observed in the Balinese calendar, which only has 210 days in a year, and on this day the entire island goes into complete shut down!

This includes shops, businesses, and even the airport – there is no work, no travelling, and noise is allowed.

This ‘Day of Silence’ is seen as a chance for self-reflection, and is enforced by the pecalang (local security offers). Beaches, streets, shops and bars are all closed, even to tourists.

13. Bali Has one of the World’s Highest Densities of Spas

It’s easy to find a massage parlour in Bali – in fact, there are around 1,200 spas across the island.

14. Malevolent Spirits are not Welcome 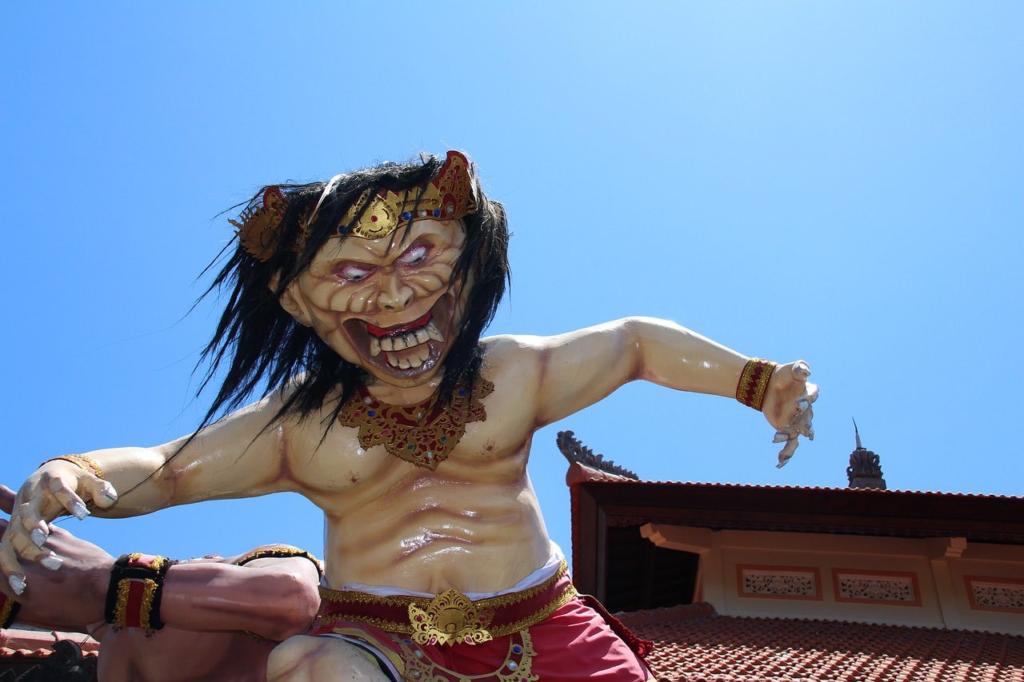 In Bali, spirits are everywhere, they sustain the balance of zen. And there are myriad practices to keep evil ones at bay.

There’s a screen behind compound gateways called an aling aling, intended to keep them out. (As it happens, Aling Aling is also the name of one of Bali’s most powerful waterfalls). Every morning, Balinese people leave offerings of food and incense wrapped in banana leaves outside their homes and businesses, to appease the spirits.

There are also noisy processions and fearsome stone carvings on walls to frighten them off.

Before his death in 2016, British pop icon David Bowie requested in his will that his ashes be scattered in Bali in a  Buddhist ritual.

There are some press reports that his family had fulfilled these wishes in a closed ceremony, though these are unconfirmed.

Bowie was a keen lover of Indonesia, and even released a song in 1984 with Iggy Pop called Tumble and Twirl – about their journey across the country.

Due to Bali’s unique location on the Ring of Fire, and having its own set of volcanoes, there are a few hidden natural hot springs situated on the island.

These mineral-rich hot water pools are regularly used by the locals for purifying and cleansing, but most tourists have never heard of them! 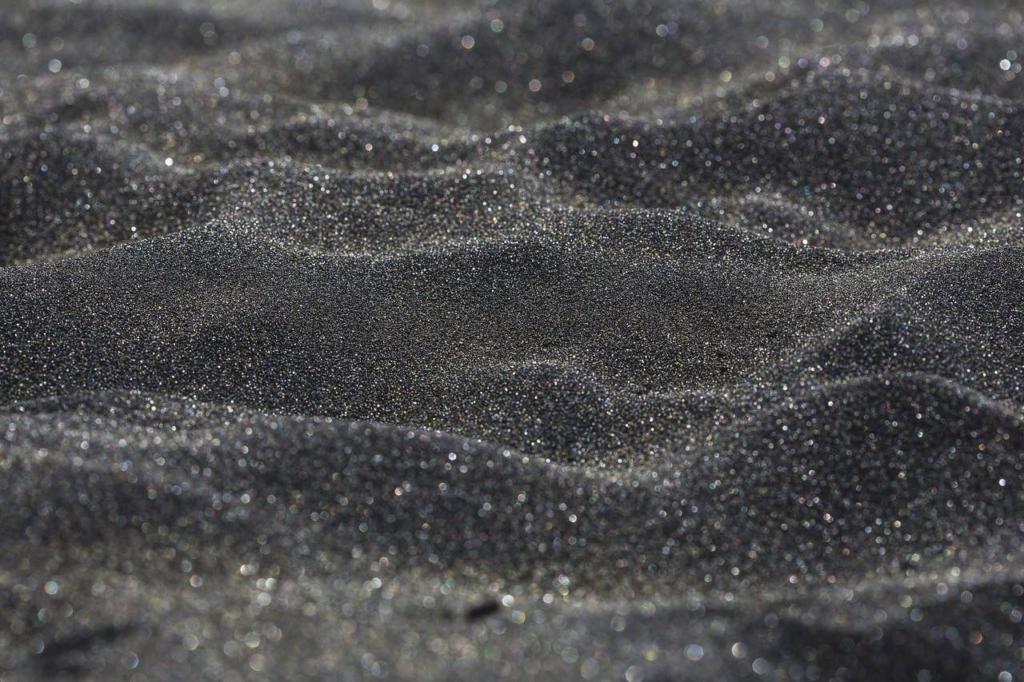 Bali is known for it’s stunning white sand beaches. And thanks to the active volcanoes on Bali, there are beaches that have pure black sand too!

18. Bali Has a Rich Arts and Culture Heritage

Bali is famous for its rich arts heritage, in fact the island is filled with a plethora of traditional forms of dance and handicrafts found nowhere else in the world.

Such is the uniqueness of Balinese art, it has drawn attention from wealthy travellers, art collectors and even celebrities.

One of the most famous foods in Bali is the suckling pig known as Babi guling, considered an absolute must.

Roasted over an open fire for several hours, the meat is flavoured with basa gede – a spicy paste, rubbed with turmeric, and basted with coconut water.

20. Those are No Ordinary Rice Fields

The iconic mountainous rice terraces of Jatiluwih and Tegallalang are more than just a photo opportunity.

In fact, they are the result of a millennia of social and spiritual culture, and ancient technological wonder. Developed in the 9th Century, they are part of an irrigation system that syphons water from groundwater sources through water temples and a unique canal system.

Self-sustaining and a virtually perfect system of eco-farming, Bali’s rice fields have been recognised by UNESCO as a World Heritage Site.

21. Ubud is a Vegan Paradise

The dreamy, picturesque village of Ubud in the heart of Bali is the ultimate wellness destination on the island.

The town and outlying streets are abundant with vegetarian, vegan, organic and raw food cafes and restaurants, with an emphasis on locally grown organic fruits and veg.

One of the most priceless things you can do is witness dolphins swimming in the calm waters off Lovina, on the northern coast of Bali.

You’ll also see the most spectacular sunrise, a bonus. Plenty of boat tours time their schedules at this time, so you’ll need to be up before dawn for a chance to catch a glimpse of the famed dolphins breaching the waters of Lovina.

23. You can even Swim with Manta Rays 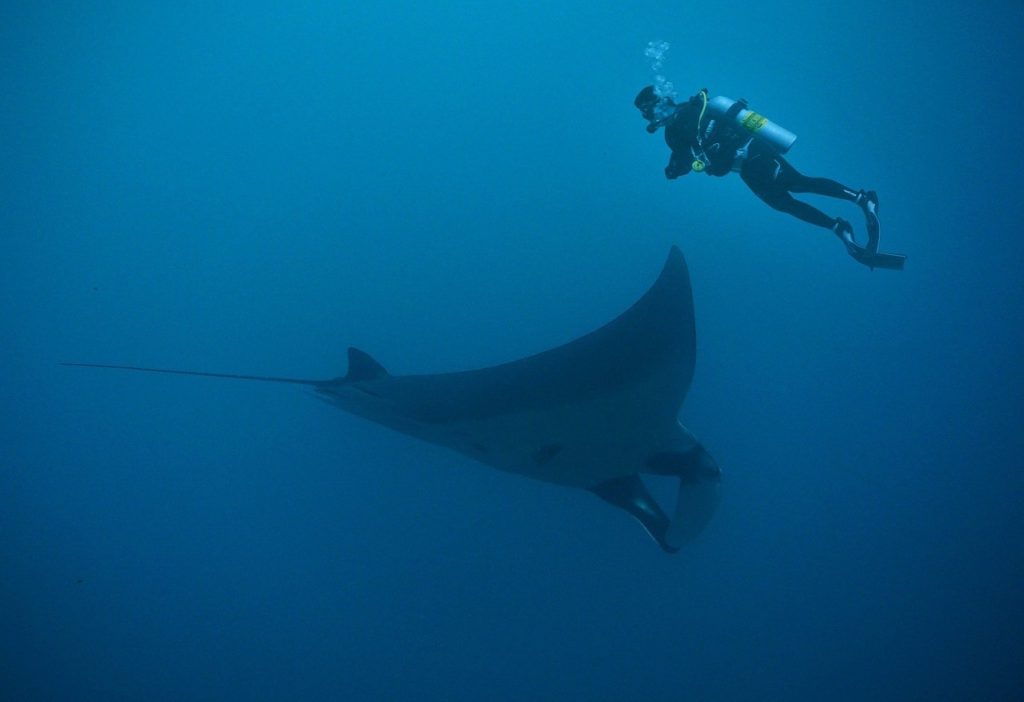 A trip to Bali gives you the rare opportunity to swim with the beautiful manta rays that come to feed on the plankton in the warm waters off the coast.

The mantas are specifically located off the west coast of Nusa Penida island, so be sure to include Nusa Penida in your itinerary for a chance to take a boat tour and spot these glorious and harmless creatures in the early mornings.

The site is home to around a thousand bats, who all hang close together, from the ceiling of the cave.

According to Balinese legend, a giant Naga snake, Basuki, lives inside the cave and feeds on the bats. Another belief is that the cave conceals a large underground network of healing water rivers.

25. You can have Gold or Silver Jewellery Custom-Made

There’s a long history and tradition of gold and silversmithing in Bali, with skills passed down through generations of families.

The two main spots are Ubud and Sanur – where you can find galleries and boutiques that can custom-make pieces of gold or silver jewellery upon request.

In some places you can even take part in workshops to create your own jewellery designs.

Did you know – in a Balinese temple, its rude to:

And get access to all my best budget travel tips, checklists, additional freebies, and more.

So there you have it – 25 of the most weird, peculiar, and fun facts about Bali.

I hope you find this post an interesting read, and that it inspires you to visit the gem of Indonesia some day!

For more information on travelling in Bali, finding hidden gems, budget travel tips and itineraries to suit your perfect trip, check out the following links:

More information, statistics and general facts about Bali and Indonesia, updated as of 2023:

Thank you for reading 25 Awesome & Unknown Facts About Bali (2023 Edition)
Do you know any other interesting facts about Bali? What’s your favorite fact? Let me know in the comments!

One of the reasons why every Balinese home has a dog… they’re the doorbell and security guard. 😂

What is the Coldest Place in South Africa?

GET YOUR FREE 20-PAGE TRAVEL PLANNER

Need some help planning your next adventure? Enter your email below and I’ll send you my FREE 20-page Travel Planner Guide. It includes packing and travel checklists, itinerary, planner, useful phrases in different languages, and more! I’ll also send my best travel tips straight to your inbox!