Malta is a tiny, tranquil and unique island in the Mediterranean Sea that’s full of wonderful surprises. With a wealth of history and culture, great food and stunning scenery, there’s no wonder it’s oen of Europe’s hottest holiday destinations.

Did you know that the Maltese islands have been ruled by nearly every major Empire of the last two millennia? Or that Malta is in fact not one, not two, not even three, but SEVEN islands?

Below I’ve compiled a list of the most interesting, fun, amazing and historical facts about this small European nation, and reasons why you need to add Malta to your bucket list!

This post contains affiliate links. I earn a small commission if you use these links.

1. One of The World’s Smallest Countries

Out of 236 countries Malta ranks 204th in size, and the smallest in the European Union. It is the world’s tenth smallest and fifth most densely populated country.

Malta’s capital Valletta, was the first ever planned city in Europe. During the Order of St. John of Jerusalem, the city was sketched out, in 1565.

3. Malta was Awarded The George Cross

Yep, there are 3 times more tourists than there are residents on the Maltese islands!

Where is Malta on the map?

If you look at a map or a globe, the Maltese islands seem invisible (unless you have a really large map). That’s because of it’s tiny size. You can see how big Malta is compared to other islands, cities and countries, here:

Malta is one of those countries in the world where people drive on the left side of the road – one of the legacies of former British rule.

They are English, Maltese, and Maltese Sign Language. However, Italian is widely spoken by the Maltese locals. Maltese has been described as sounding like a cross between Italian and Arabic.

Malta has a long Christian legacy, with Catholicism the official religion.

8. Once Controlled by The Knights of St. John

Also known as the Knights Templars, the famous elite warriors were given control of the islands in 1530 by Charles V of Spain. They are best known for successfully defending the island against the Ottomans.

9. Malta Was Ruled by Many Empires

Malta gained independence from the UK in 1964, after 160 years of British rule. You’ll find many relics of the British Empire still scattered around Malta today.

There are several sunken World War Two ships, submarines and fighter planes scattered around the coastline of Malta.

12. The Capital is a UNESCO World Heritage Site

The Capital, Valletta, is one of the most concentrated historical areas in the world, according to UNESCO.

13. Pan-Fried Rabbit: Exclusive to these Islands

There’s food and drink that’s exclusive to Malta – Pan-fried Rabbit is a delicious dish, and Kinnie is the national soda made from bitter oranges.

14. One Of The World’s Top Emerging Tourist Spots

With its warm climate, numerous adventure areas, architectural and historical monuments – including 3 UNESCO World Heritage Sites and 7 megalithic temples, Malta is fast becoming one of the hottest tourist spots on earth.

Malta is a popular filming location for big budget productions – including blockbusters like Gladiator and World War Z, and the hit TV series Game Of Thrones. Check out this overview of film productions in Malta.

The waters surrounding Malta and Gozo are an incredible blend of crystal-clear blue and green. The Blue Lagoon, on Malta’s Comino Island, is the most popular attraction on the Maltese islands.

17. Easy to Explore Within Minutes

At just 17 miles wide, the tiny island of Malta is easy to explore and you get from one end of the island to the other within minutes!

Malta has also been described as the country with the best climate in the world by International Living. It was also voted the best place to retire too!

The Maltese islands are home to some of the Oldest Man-made Structures in the world, with some thought to be dating back 3,600 BC, some 5,000 years ago. Its megalithic temples are older than the Pyramids of Egypt, The Great Wall of China, and even Stonehenge in England.

More information, statistics and general facts about Malta and Gozo, updated as of 2022:

Here’s the ten largest cities in Malta. Interestingly, the capital, Valletta, is not in this list, nor are several major tourist attraction cities (Mdina, St. Julians, Victoria, Mellieha). Moreover, the largest city has a population of less than 22,000. Source: Population Hub

Here’s a list of famous Maltese people and celebrities who trace their ancestry to Malta:

How old is Malta?

Despite its small size, Malta has a long history, having being first inhabited around 5900 BC. The first settlers were farmers, and their agricultural methods degraded the soil until the islands became uninhabitable.

What is Malta famous for?

As well as being well-known for its stunning diving spots, prehistoric sites, and festivals, Malta is a popular movie location in its own right. The picturesque landscapes, dramatic cliffs and ancient buildings provide the perfect backdrop for many feature films and hit TV shows, especially those aiming for an antiquated vibe.

Malta is unique in that you can visit practically every spot and corner of the island within an hour’s drive, due to its small size. Add to that the combination of gorgeous weather, aqua-blue seas and stunning scenery, monolithic temples and buzzing nightlife, Malta is also famous for its local traditional cuisine, and old character houses with brightly-coloured balconies.

How did Malta get its name?

Why is Malta named Malta? It’s widely believed the word ‘Malta’ derived from the Greek word μέλι, (meli), meaning ‘honey’. The ancient Greeks called the island Μελίτη (Melitē), which means ‘honey-sweet’, which may be due to Malta’s unique production of honey, as an endemic subspecies of bees live on the island.

Is Malta part of Spain or Italy?

The island state of Malta is situated in the Mediterranean Sea just below Sicily (Italy). It consists of three main islands: Malta, Gozo, and Comino, with Malta being the largest island. As Malta is a sovereign state, it is not part of either Spain or Italy.

Malta is considered a safe place to visit and among the safest destinations in Europe, although there was a gruesome unsolved incident involving a young German tourist who’s body was found with all his major organs removed. There has not been any terrorist incidents on the islands in the past several years, and the crime rate is low.

Malta has been dominated by 11 foreign rulers in the last two millennia. Malta has been a sovereign state since gaining independence from the British Empire in 1964. The country is still part of the British Commonwealth.

Flights: As always, I source the cheapest flights on the web from Skyscanner and Kiwi.com. They are considered the top flight search engines for the best deals.

Accommodation: I use Booking to find fantastic cheap stays with free cancellation options.

Travel Insurance: Stay protected from theft, injury, illness, and cancellations. A safety net in case anything goes wrong, I never leave without it. World Nomads is my favourite agent for total peace of mind.

Tours: I book all my fave activities and guided tours on Get Your Guide & Viator – they do superb deals whilst offering excellent customer support. 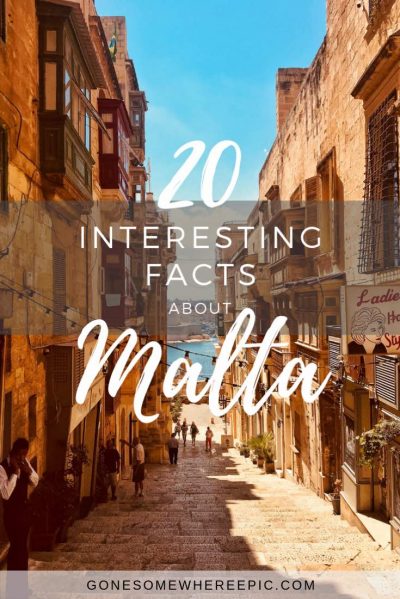 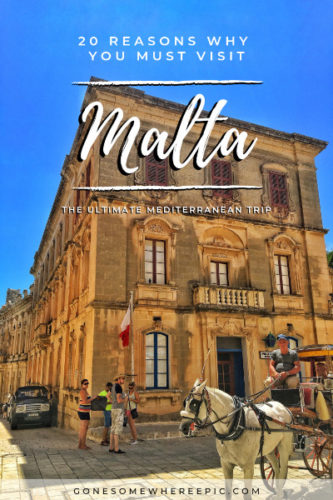 I hope you find this list an interesting read, and that it inspires you to visit Malta one day!

Check out the following useful posts and guides on Malta and Gozo:

Thank you for reading 20 Interesting Facts About Malta. I hope you learned something interesting!

What’s your favourite fact about Malta? Leave a comment below!

Best Travel Insurance for Malta in 2023

Top 10 Things to Do in Birmingham, UK (by a Local)

22 Best Things to Do in Stratford Upon Avon, UK