Malta – a paradise island in the centre of the Mediterranean Sea, is one of the most popular holiday destinations in Europe, and this is in part due to being the only island state in the world where everything from towns, beaches, museums, treks, historical sites and adventures, are within 1-2 hours reach of each other.

Incredibly, the island is SO tiny that its not visible to the eye on a world map!

This post breaks down some useful facts and information on how far all the major spots and attractions are from each other across the Maltese islands. It also gives you a perspective of the size of Malta compared to other islands, cities, and regions around the world.

Scroll on to read all the details in this post: How Big Is Malta? (+ Size Comparison Maps)

The archipelago of Malta is situated in the centre of the Mediterranean Sea, directly south of Italy (Sicily), north of Libya, and east of Tunisia.

The capital city is Valletta, while the largest locality is Birkirkara. The island is made up of many small towns, which together form one larger urban zone with a population of 409,259. The landscape is characterised by low hills with terraced fields.

With a population of around 475,000 over an area of 316 square kilometres (122 square miles), Malta is the world’s tenth smallest and the fifth most densely-populated sovereign country.

Malta’s capital city, Valletta, is a UNESCO World Heritage City and is the smallest national capital in the EU – at 0.8 square kilometres (0.31 square miles) in size. Once the base of the legendary Knights of St John, it was also the first planned capital in Europe.

Malta is the largest of the three major islands that form the Maltese archipelago.

How many miles long is Malta?

Malta’s sister island Gozo is 67 square kilometres in size. Though smaller than Malta island, it’s still much bigger than Comino, so a car is required to get around.

Malta’s third and smallest of its three main islands, Comino, is 2.7 square kilometres. Considerably smaller than Gozo, let alone Malta, this makes the island easy to explore on foot in a day.

How Does Malta Look on a Map?

The following are satellite images from Google, showing Malta on a map of Europe. I’ve placed a red circle around Malta to show how tiny Malta is amongst its fellow European countries.

Here’s a map of the European mainland. You can see that Malta is barely visible within the red circle.

Now here’s’ a close up, of the Mediterranean Sea. Even amongst the other islands, we can see the Balearic islands, Sardinina, Sicily, Crete and more, and yet Malta is still so tiny!

Zooming in further, we can finally see a clearer image of Malta (and make out its second island Gozo, but not Comino island). From this image, we can see the sheer scale of Sicily compared to Malta.

Check out the map below, of all the top landmarks, sites, and attractions across Malta, Gozo and Comino islands.

Here’s a guide to how far each of the major locations are from each other in Malta, and how long it would take to reach them.

(Note: the estimations below are based on journeys by car.)

If you’re based in Valletta:

Tip: there’s a ferry route between Valletta and Sliema that costs less than €2 a person, each way.

If you’re based in St. Julian’s / Sliema:

If you’re based in Bugibba / St. Paul’s Bay:

Popular Post: 13 Places in Bali That You MUST Visit

How Big is Malta Compared to Other Places?

Using satellite images from Google and data from other sources like mapfight.appspot.com, I created some comparison images that accurately display the size of Malta alongside other popular islands and cities around the world, to give you an idea of just how big Malta and those other places are.

Cyprus is 29 times bigger than Malta. 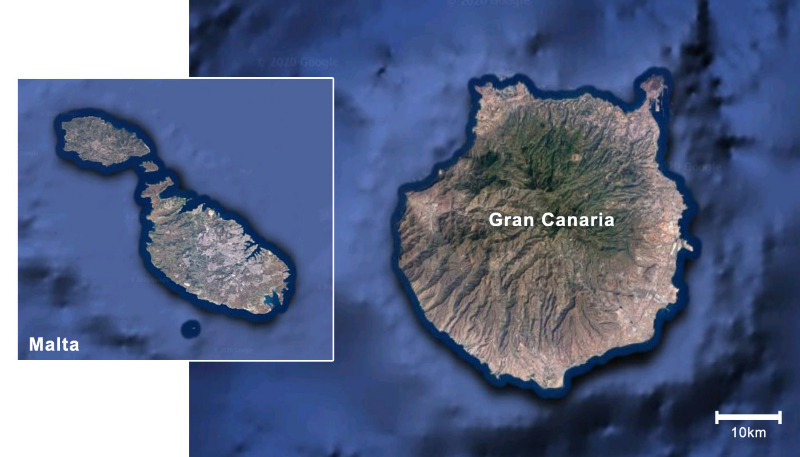 Bali is 18 times bigger than Malta.

Singapore is 2.3 times bigger than Malta.

Interestingly, Singapore is twice the size of Malta, but has nearly 12 times more people.

What is Malta the same size as?

Malta is roughly the same size as the Isle of Wight off the coast of England. Although the latter is slightly larger, it is less densely populated.

The Isle of Wight (UK) is 1.2 times bigger than Malta.

Here are some other islands that are roughly the same size as Malta:

So.. Malta is indeed a very small country!

The definition of small is subjective – countries like Denmark, Serbia, and Cambodia, are considered small, and even islands like Iceland and Sri Lanka. And yet, all of these countries dwarf Malta in size.

From my own experience of visiting Malta, I was able to see most of the major attractions across the country in 7 days, without even rushing. It really is easy to enjoy a week-long, laidback vacation without missing out.

Tip: Be sure to spend at least one day (more is better) exploring Gozo island.

Is Malta part of Spain or Italy?

A question many a traveller asks is this – is Malta part of Spain or Italy? The answer to that is neither. Malta is a sovereign state, therefore does not belong to either Spain or Italy, despite being a Mediterranean island sitting very close to Sicily.

Over the centuries, Malta has been under the rule of several major empires, including: the Byzantines, Carthaginians, Romans, Normans, French, and lastly, the British Empire. Malta gained independence from Britain in 1964.

Can you walk around Malta in a day?

While Malta is small, island, it would take more than a day to walk around the entire island. As an example: if you were to walk across the length of the island, from Marsaxlokk on the south-east coast, all the way to Armier Bay on the north-west coast, it would take six and a half hours.

What countries is Malta close to?

Is Malta easy to get around?

The small size of the Maltese islands makes getting around Malta very easy and hassle-free. There is a very affordable and efficient public bus service on Malta and Gozo that serves the major tourist areas. You can download your Malta route map here.

Renting a car in Malta is perhaps the best option if you want to explore the farther reaches of the Maltese islands. It’s especially convenient for couples and families. Driving is on the left, and all road signs are in English. There are excellent car rentals from major international car companies from as little as 16 euros a day.

Is Malta famous for anything?

Malta is known for its prehistoric temple ruins that predate the Pyramids of Giza and even Stonehenge. As well as wealth of historical landmarks, castles and temples, Malta is famous for its stunning, aqua-blue waters, picturesque hiking trails and world-class diving sites. The islands are used in Hollywood movies and hit TV shows, and there are plenty to see and do for everyone. For the perfect one week vacation, head over to my post: Malta 1 Week Itinerary

Is Malta expensive to visit?

Malta is a relatively expensive travel destination when compared with other European destinations, such as Bulgaria and even Barcelona, though it did fare well against Madrid. At an average cost of €55 per day, Malta is an expensive holiday but it’s well worth it to see this beautiful and underrated country.

As always, I source the cheapest flights on the web from Skyscanner and Kiwi.com. They are considered the top flight search engines for the best deals.

I use Booking to find fantastic cheap stays with free cancellation options.

Travel insurance will protect you from theft, injury, illness, and cancellations. A safety net in case anything goes wrong, I never leave without it. World Nomads is my favourite agent for total peace of mind.

I book all my fave activities and guided tours on Get Your Guide & Viator – they do superb deals whilst offering excellent customer support.

Malta Day Trips and Activities on Get Your Guide:

Check out some excellent deals on tickets for the most popular day trips and activities around Malta. (Remember, you can cancel your bookings at anytime!)

For more in-depth reading on Malta and Gozo, you can get your hands on a copy of these bestsellers below:

I hope you enjoyed this post! Let me know your thoughts in the comments below.

All Posts »
PrevPreviousOld Maps of the United States: Vintage Prints (Free PDF Maps)
Next41+ Free Online Courses, Tools & Software to Get Through LockdownNext