Moving on from my Vintage Maps of Europe post, I’ve compiled a collection of more incredible antique maps, this time of the United States of America.

I’ve been a passionate fan of vintage world maps since I was a small boy. I used to pour over a big atlas and geography books in my after school time, and I was especially keen on globes.

I’m excited to present a collection of some of the best antique and historical maps of the USA, as well as many states and cities – including California, Texas, Florida, San Francisco and New York City and more, dating back to the 1800’s.

Interestingly you can see the different borders and the territorial growth of various states, and the Indian Territories, before they became newly established states.

Each map in this post comes with a link to high resolution, full printable PDF versions. Simply click on the link to download your free copy.

Here’s a stunning and delicately detailed vintage map of the United States from the 1850s with brightly-coloured states. As you can see, much of the central and mid-western US was still vast Indian Territories, with some states not yet in existence – including Nevada, Wyoming, Arizona etc., while other states like Oregon, Utah and Nebraska, were much larger than they are today.

The Citizens Atlas Map of the USA, circa 1892

This map was produced 35 years after the previous map, and as you can see – the new states were formed and borders changed, making this a more accurate depiction of the modern day US.

Map of the United States of America, 1898

This map, by a German cartographer, is very similar to the previous one, six years earlier, however it also features modern day Mexico and a few Caribbean islands like Cuba, Jamaica and Haiti.

Mitchells Vintage Map of the USA, 1864

Another beautiful vintage map from an older era of the US, between the Colton map of 1857 and the Citizens Atlas of 1892. Still a unique design and with different borders, some newly formed states and a few states not yet formed.

An excellent map of the original 13 colonies on the East Coast of the United States.

Popular Post: 13 Places in Bali That You MUST Visit

Another impressive vintage map of the United States as it was in 1835, which was only in the Eastern part of modern day USA (the Western regions were still Indian Territories and the former Mexican Empire, of which Texas and California were part of).

Vintage Maps of US States

The following is a collection of vintage maps of some US states that had already developed populations, towns, cities and road networks in the 19th Century.

Map of North and South Carolina

The states of North Carolina and South Carolina were part of the original 13 colonies, two of the oldest states in the US.

A detailed map of the state of Georgia, from around 1885.

Another highly-detailed map, this time of Texas state from 1885. You can see the fine detail and borders of all the districts and regions within Texas.

Here we have two maps – one of the Greater New York City area, and the second one shows the Borough of Manhattan (split into two sections).

This map is zoomed in on the Borough of Manhattan.

Another unique and pretty map of Manhattan in new York City. Like the others, this image doesn’t really do the map justice, so click on the PDF link below to download the full quality map to see all that minute detail.

An impressively detailed and coloured map of California state that includes a close up of San Francisco with all its blocks and roads, from 1855.

This map shows a very brightly highlighted border of California state along with highlighted districts and regions within.

When was the first map of America made?

The First Map of America was drawn in 1784 by Abel Buell.

The Italian explorer Christopher Columbus is widely regarded as the founder of America when he officially set foot in the Americas in 1492, claiming the land for Spain. An annual holiday commemorates this on October 12 each year.

That being said, Columbus is not actually the first human to set foot on American land, because Native Americans were already living on the land for thousands of years prior.

Who was the first person to identify America on a map?

The Waldseemüller map, or Universalis Cosmographia (Universal Cosmography) is a printed wall map of the world by the German cartographer Martin Waldseemüller, first published in April 1507. It is known as the first ever map to use the name “America”.

How did America get its name?

America is named after Amerigo Vespucci, an Italian explorer who set forth the revolutionary concept at the time that the lands Christopher Columbus sailed to in 1492 were part of a separate continent. He included on the map data gathered by Vespucci during his voyages of 1501-1502 to the New World.

Who created the US map?

In March 1784, only six months later, Abel Buell (1742–1822), an engraver from Connecticut, produced his New and Correct Map of the United States of North America,which, among other things, has been recognized as the very first map of the newly independent United States compiled, printed, and published in America by an American. Additionally, the 1784 publication is the first map to be copyrighted in the United States, registered under the auspices of the Connecticut State Assembly. Source: Library of Congress 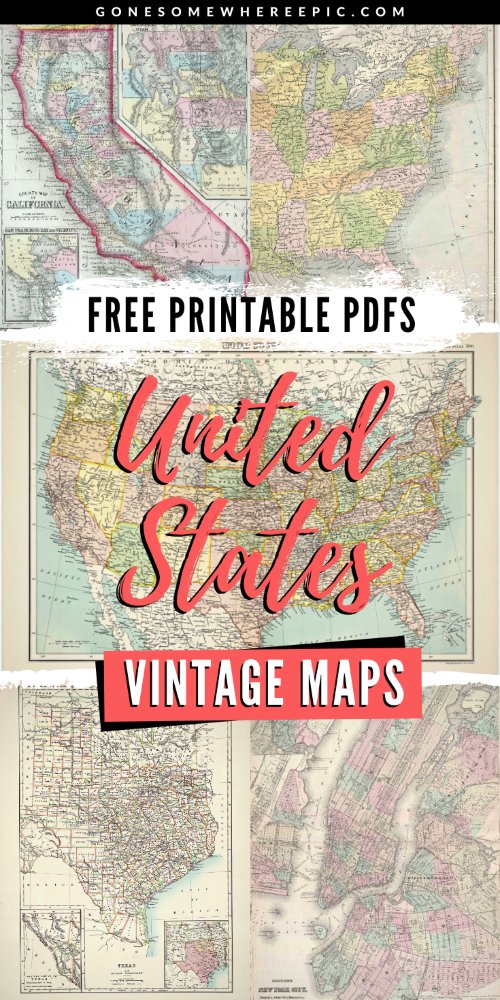 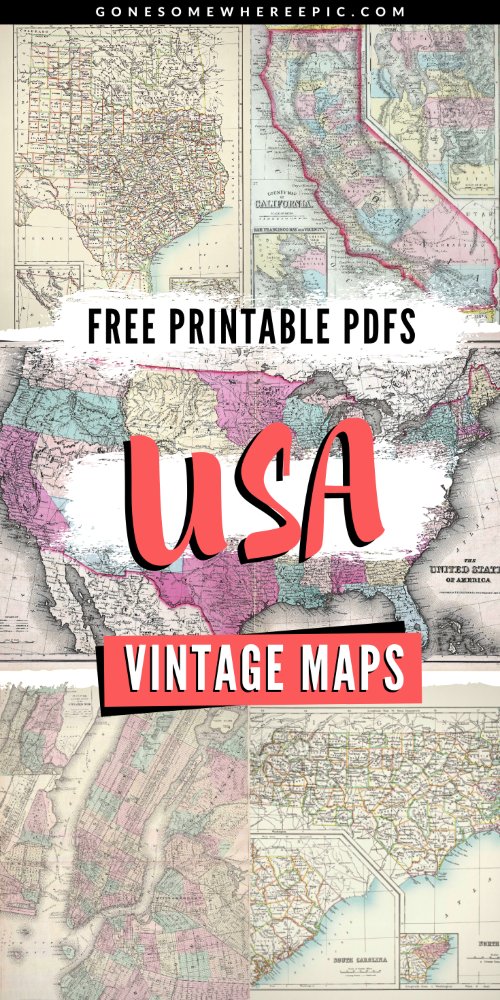 Thank you for reading my post: Old Maps of the United States: Vintage Prints (Free PDF Maps)
Let me know what you thought in the comments!

And get access to all my best budget travel tips, checklists, additional freebies, and more.

What is the Coldest Place in South Africa?

GET YOUR FREE 20-PAGE TRAVEL PLANNER

Need some help planning your next adventure? Enter your email below and I’ll send you my FREE 20-page Travel Planner Guide. It includes packing and travel checklists, itinerary, planner, useful phrases in different languages, and more! I’ll also send my best travel tips straight to your inbox!